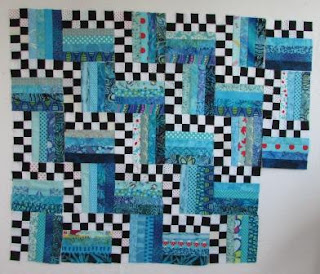 Well we are coming to the end of the blue scraps for the Rainbow Scrap Challenge. I worked on my blocks for the latest Leaders and Enders challenge issued Bonnie Hunter. I got 28 more blocks done and they are more of a turquoise blue not royal blue. The little Black and White square are great for L/E but not so much the strips. I want to shade them, from light to dark. I sewed a few other things and it is great to have the little bits for L/E around. 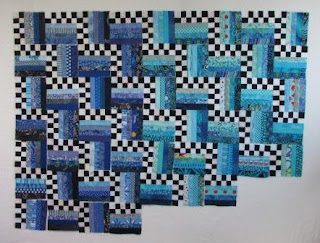 I put them all on the wall together. I like to put the whole months worth of blocks up on the wall at the end of the month. This month these blocks just about fills the wall. I just would not have room to put them all up. I love how 3D this is looking.

I have posted to Soscrappy. Go and see what others are making with their blue scraps. 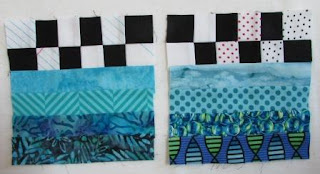 Here again is the left and right block. I am using a few different white light fabrics. I have also used up and cut so many different brands of black scraps. I might have to go look for a few more scraps. I know I have some long strips left from the quilt backing, I am sure there are more to be found.

While I am off to another Agility trial today with the dog. We are having so much fun. Next week we leave for Nationals. I am getting pretty excited to be going to complete in Nationals. I might not be getting much personal sewing done in the next 2 weeks. 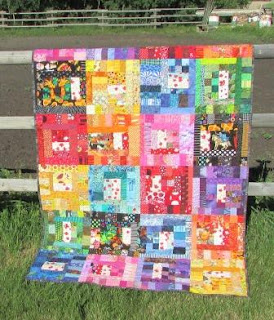 I got the last of the charity quilts done for The Great Canadian Quilt Bee and Ronald McDonald House. I started working on blocks back in January and ended up deciding to make 3 quilts to give away and one for me to keep. I got all 3 charity quilts done. This is the last one.  The quilt for me is close to being done too. 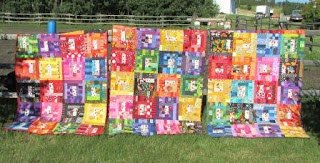 Here are all three on the fence together. I made the 4 by 6 block size, so the larger size they were looking for. I used Cheryl Arkison's slab blocks as the pattern, Then I also have at least one Canadian fabric in each block. Sometimes there is a extra maple leave fabric too. I had some black, red and teal maple leave fabric to add in. 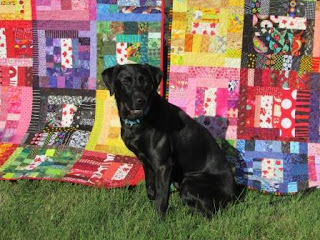 Gemma my Lab got to get into the photo too. Yes the sun was crazy bright and hot. 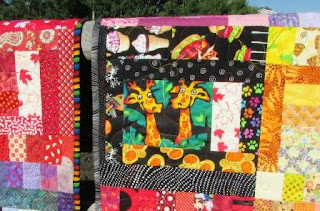 You can see some of the cute fabrics that got added into this quilt. I did some fuzzy cutting to get the animals just right. 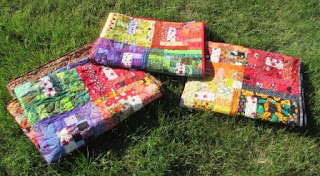 Here are the 3 quilts 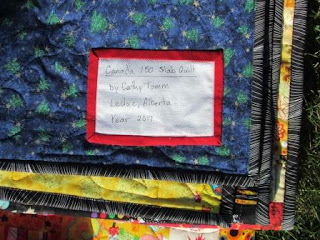 The labels that I made for the backside.

I have added this post to Crazy Mom Quilts and Confessions of a Fabric Addict and Soscrappy. 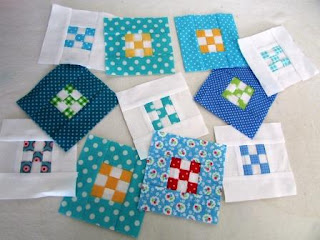 I got a new crop of mini nine patches done, BLUE. I need half the blocks to be a colour around and half need to be white on the out edge. I want the blues used in this quilt to be a little bit on the light or turquoise side and not too dark. These blocks finish to 3 1/2", so yes they are small. 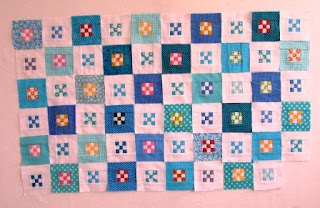 I have added this post to Soscrappy and the Rainbow Scrap Challenge . 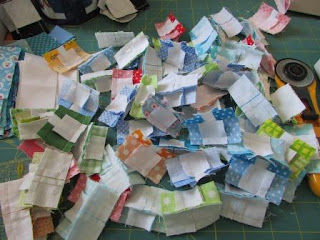 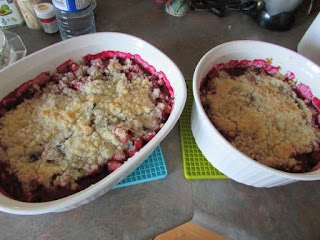 I picked Saskatoons today and added Rhubarb to make a fruit pudding.  We are about to dig in and eat some. 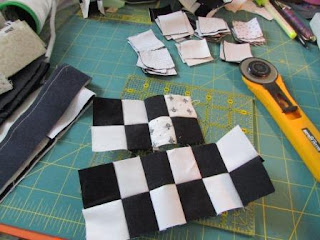 I got started on Bonnie Hunter's next Leader's and Ender's challenge. I am making 6" blocks that have these great checkerboard black and white units. She had a baby quilt some time ago and I loved the Black and White checker board she used. I did not start that quilt but when I saw this rail fence  Opps I started it. Another quilt started. 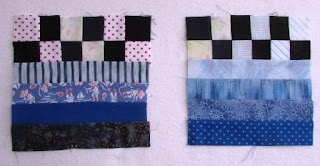 There is kind of a right and a left block. See how the white is the top right or top left side. 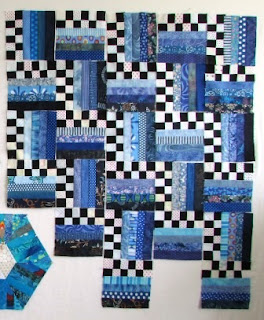 I love how they all look together. So much fun!

I made more Honey Comb blocks, these are the dark blue to navy blocks. I have a lot of dark blue scraps. 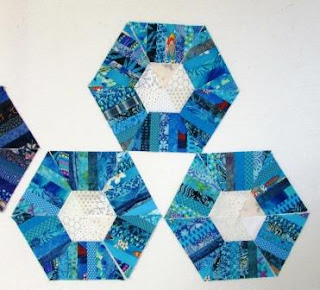 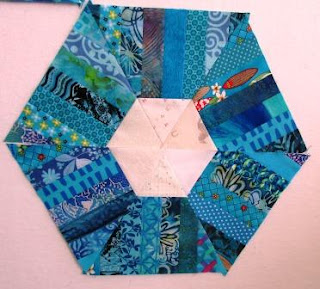 I have used mostly the 1 1/2" strips. Can you see the Hawaii surf board fabric? 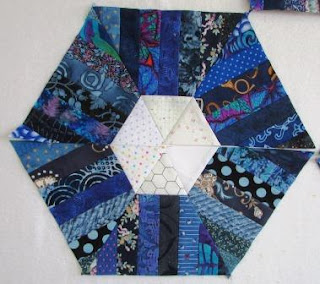 There is Spider-man fabric and Equestrian fabrics.

I also just got started on my Blue mini nine patches. Yes they are crazy small. Maybe by next week I will have some blocks done and on the wall. 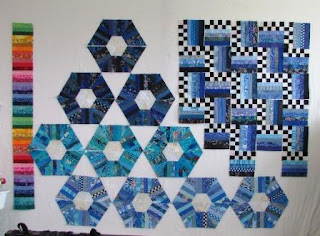 The design wall is nice and full of blue. The four on the bottom are from last week. I have so much done for Blue Honey Comb blocks. 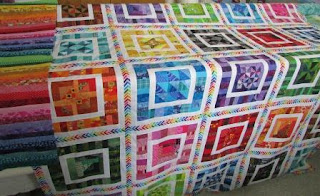 The big rainbow quilt is still being worked on. I do not have the boarders done yet. I have a far bit of work still to do on the top. I am going to use the rainbow strip set to make the boarder. Maybe by next weekend, at least I am getting closer to being done.

I have added my post to Soscrappy. Check out all the other great Rainbow Scrap Challenge projects that are underway. 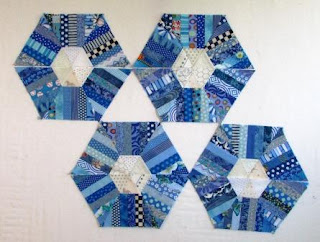 I worked very hard on my blue scraps this past week. I can hardly believe this is all I can show you so far for Blue. It took so long to sort and trim all kinds of blue. I had lots of blue, I got carried away and make 4 Bright blue blocks, I still have the darker almost navy colours to do. I also will have the turquoise blues for honey comb blocks because I did not start this till late March.

My design wall has been busy so I laid these out on the ironing board first before I sewed the blocks. 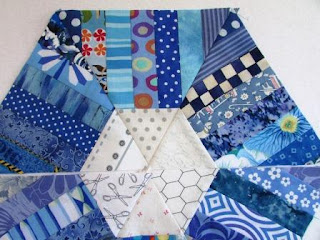 Lots of pretty blue, Some are so old. I made my son a pair of pants when he was 2 out of the blue checkered fabric. He is in 3rd year University now. 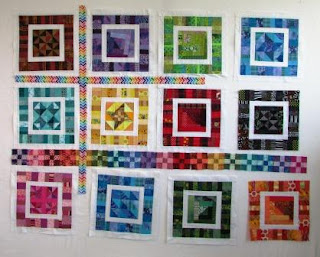 Also this week, I worked very hard on this older Rainbow Scrap Challenge quilt. I looked back and the brown top left block was the first one I did back in Nov 2011.
Maybe rainbow nine patches as sashing?  or a rainbow fabric? 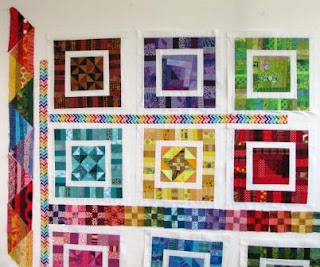 I tried out a few different sashing options. I had planned an olive green but it was dead looking, so dead I did not ever take a photo. Trust me it was not good. Also I tried the triangles on the boarder, no not right either, added to much different stuff. 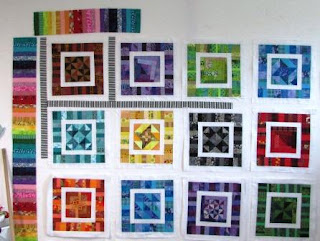 Maybe Black and White sashing? Oh I kind of like the boarder, I will to make new fabric and lots of it. 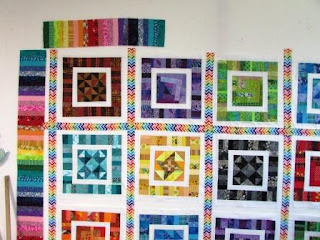 Ok, I think this is what I will do. I have lots to do now. I need to make a few more strip sets of colour to make the boarder. I think I will also leave that first Brown block as the top corner, as it was the first block. I have 25 blocks so this quilt will be 5 by 5 and I think around 76" before the boarders are on.


I have added this post to Soscrappy.
I am away at another dog agility trial this weekend. The club I have joined is hosting a trial and I have a job to do as well as run my dog. We are in a heat wave, so stay cool.
Posted by Cathy Tomm at 6:53 AM 14 comments: 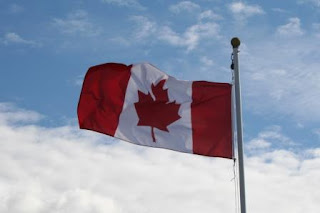 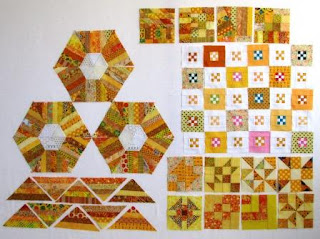 We have come to the end of June and Yellow. I got a little more done in yellow this week. I love to see all the blocks up and once. I think I forgot 2 but it is most of the yellow I did. 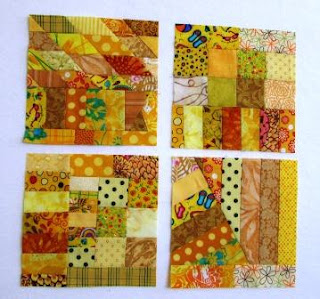 Some scraps were sitting on the table and needed to be something, so 6" crumb blocks.

I also got the triangle strings done this week.

Now on to Blue, so pretty Blue. I am sure I have lots to work on. I have linked up with Soscrappy, our leader in the Rainbow Scrap Challenge.