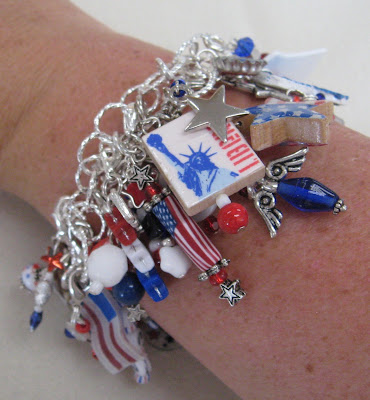 This is my finished bracelet I made using my 4th of July charms. I think there are some 45 charms on here. I was the only silly Canadian in the group. I say silly because I am very Canadian and proud of it, but the Americans are cousins and good friends. I have some real american cousins. 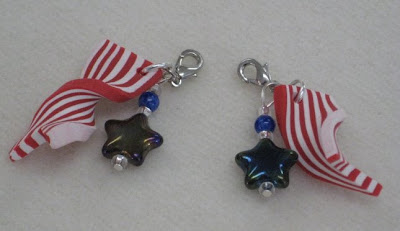 This is my charm I sent in. I wanted the Red and White ribbions that you see drapped on the banishers of some homes. I knew there would be many flags so I wanted ribbions. I got it by making a cane of Red and White Fimo. After cutting a slice, I gave the ribbion a twist like it is fabric in the wind. 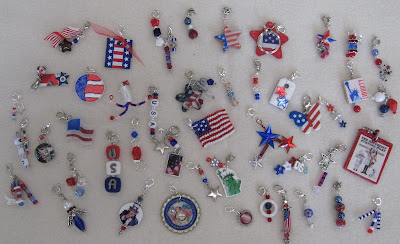 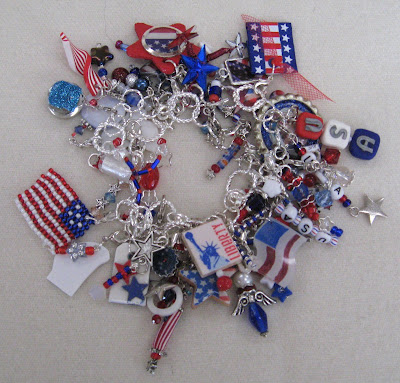 Posted by Cathy Tomm at 7:00 AM No comments: Links to this post

Spring Charm Swap in May

Spring Charm Swap on Two Peas in a Bucket was back in May of this year. I made this bracelet with the charms I got back. I wear it to town often and many people ask me about my bracelet. I started to do Internet swaps on Two Peas this year because I wanted to do a charm swap. I had heard about these swaps in a magazine and needed to find a group to swap with. When I Googled for a swap, this is the one I found. I am signed up for many of these charm swaps and I am sure if you follow me you will see more. 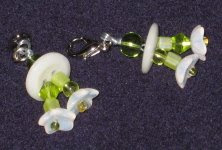 Here is the charm that I made to send in. It is made with a button and glass beads. It is less than 1 1/2" in length. I made some extra and have a pair of earrings to go with my bracelet.
Posted by Cathy Tomm at 7:30 PM No comments: Links to this post 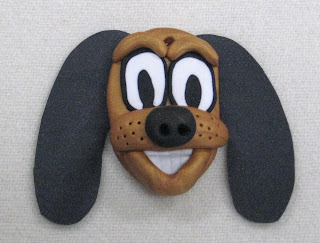 Disney Art Doll Swap on Two Peas in a Bucket. I just sent these to Iowa to be swapped out. This is my Pluto made with Fimo clay. The swap required one found object in it, so the ears are made of rubber pond liner. I, at first found a black rubber tubing on the beach on Vancouver Island, but did not bring enough home. Then I remembered I had water garden pond liner left and it would work great. I was pleased that the golden dog looks more like Pluto then I ever thought I would achieve. My kids even saw Pluto when I showed them. I have been playing with Fimo clay for more than 15 years. 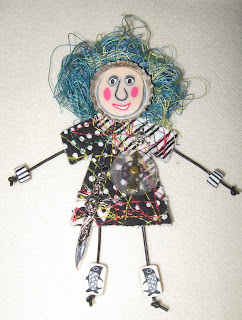 The next pendant is Elizabeth Swan, female pirate. I found beer bottle caps to use around her face, for the require found object element. Some of them were also found on the some beach and some on my kitchen counter. I thought Beer caps for the pirate was good ( only Rum caps would have been better, maybe if I was at Uncle Dave's, I might find them). I made Fimo faces and Fimo beads for hands and feet. She has a purched pirate sword, a tiny skull charm on her shoulder (photo not showing this) and a compose made of Shirk Dink stamped and a spinner in the centre. Her hair is cotton thread, saved clipping from quilting a customer's quilt ( I never throw that out, may need it some day), so each doll has a different colour hair. If there had been a recycle requirement I would have fulfilled that too. Her dress/body is a quilt sandwich of different black and white fabrics. It is ruff edge cut out of a larger quilted piece. I sew through the dress/body to attach the hair then the leather cord for arms and legs. In the back is a leather cord with a jump ring so that she is a pendant. I have sent a pin that could be added to the back side if any of the ladies want her to be a pin also. I planned for mine to be a pin. She is a little large for a pendent.
Wow did you get all that. I have been making little fabic doll pins for years. I have been calling them Thread Head Doll Pins. They too have the faces and bead hands and feet, and the hair. So to make one that was a "pirate" was all that I had to work out, and add the pendant attachment. 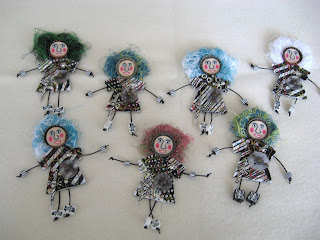 Here is the group of seven of them that I sent. They all have there own personalities.
Posted by Cathy Tomm at 12:02 PM 2 comments: Links to this post 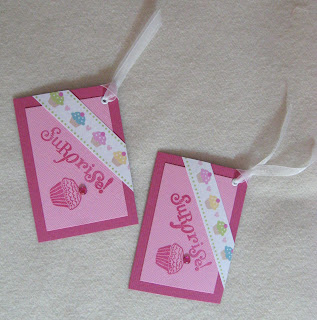 I am in a swap on Two Peas in a Bucket that is a scrapbooker's cupcake theme. Above are my ACT (Artist Trading Cards size 3.5"x 2.5") for one of the groups. 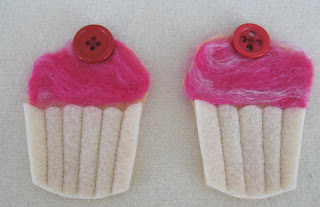 These are my felt cupcakes. They can be used to embellish a scrapbook page. I have sewn the paper cup part and then needle punched the pink wool to make the frosting, added a cherry on top with a button. They almost look good enough to eat.

These are my pages for the 6" x 6" page swap group. I have Shrink Dink buttons on the left page and a tag in a pocket. Then the right side has is a band on the bottom using the Burnished Velvet technique. It is the first time I had tried this. It is double sided tape on a printed paper and then a transparent super fine glitter. You rub the glitter into the tape and it gets a smooth feeling and lots of glitter. A couple of Canadian girls are the creators - Deanna Pannell and Haroldine Wingfield. The photo does not show the glitter. The large cupcake is a stamp I made. 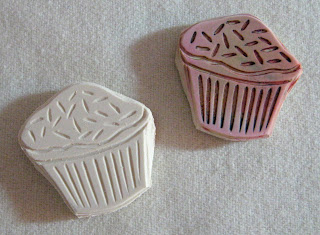 I made a stamp using Speed ball matterial. I drew a cupcake in pencil, on paper then rubbed the pattern onto the rubber. Then crave away some areas and not others. The stamp on the right is my used one and the stamp on the left is to swap. I think all the groups I am in have 10 people. So I have made 10 of each and will get back one of mine plus 9 other cupcake things.
Posted by Cathy Tomm at 11:55 PM 4 comments: Links to this post

Fibre Charm Swap from May 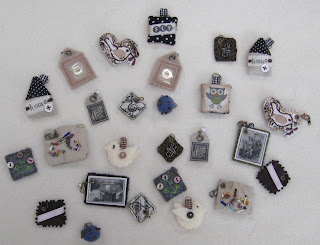 These are the great fibre charms I got from a swap on Two Peas in a Bucket. The swap was hosted by "cbjenks". We were to make them antique looking and use antique brass findings. Below are the two different charms that I made. I did photo transfer onto fabric using Golden Gel medium matt and printed copies of my images. Some one asked me how I did it one day. Maybe I will do a photo by photo demo the next time I tranfer photos onto fabric. 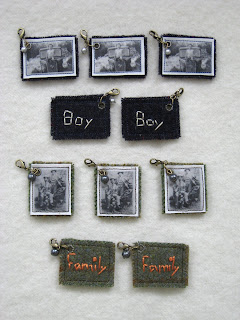 The two men together are my Grandfather and his dad. They are in Jacksonville FL in about 1913. The man sitting, is sitting on a stuffed crocodile. They were from Exploits Newfoundland and were traveling around North American. 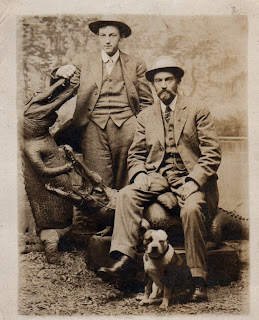 The Boy on the car is my dad when he was small. 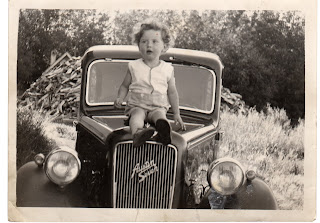 Posted by Cathy Tomm at 5:54 PM No comments: Links to this post 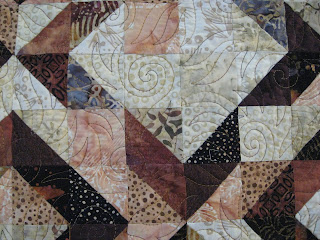 I machine quilted this quilt for my mom, Betty Manuel. She is my best quilting buddy. Betty has made this quilt using half square triangles. It is a wedding gift. I love the way the dark and lights blend and mix. I was with her when she started to shop for the fabrics. I have quilted this on my long arm machine. I call this free motion pattern "spirals and flames". It is a nice close pattern to do on a quilt that has lots of piecing. The thread I used is a brown multicoloured cotton by Wounder Fil colour number TU34. 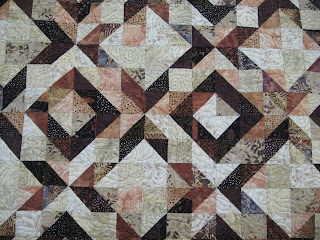 A fuller view of the quilt. It also has a dark chocolate boarder. I believe she started with a pattern but chagned the outer area and did not put in the inner boarder.
Posted by Cathy Tomm at 5:22 PM 3 comments: Links to this post 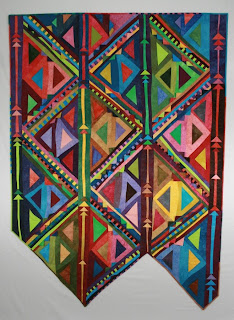 Here is one of my quilts. I hope to have a slide show of more of my quilts some day soon. This one is called Tri Tri More. It is about 58" wide and 80 " tall. I do have many of my quilts for sale.
Posted by Cathy Tomm at 2:42 AM No comments: Links to this post 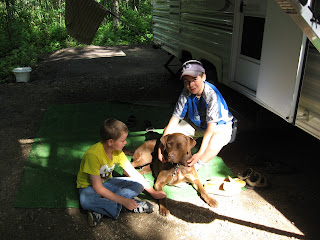 Here are photos of our trip last week to Lesser Slave Lake. It was great weather the first few days and one day with some rain. The dog loved the trip, being with family all day. He played in the water with the boys and then dug in the sand, went for walks down the beach with me. We all love our trips to Lesser Slave Lake. Me and my parents had a cabin up there many years ago. Makes me think more about what childhood summers are all about. Did you ever chase down the ice cream truck and cry if you missed it? 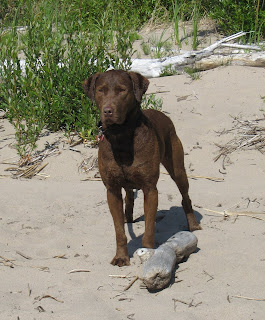 Posted by Cathy Tomm at 2:42 AM No comments: Links to this post

Dotee Dolls for a Swap 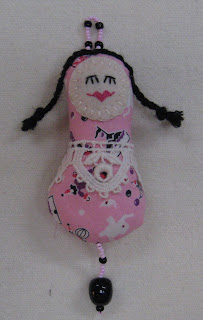 This "Besty Bakes Alot". She is the second of the dotee dolls that I have made. She is in the vintage group. I have used a 30's reproduction fabric in pink and the added a lace apron and black braided hair. 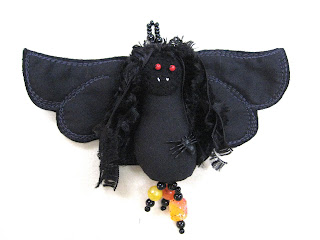 This is "Vampire Bat". He is the latest Dotee Doll that I have made. He was made for the Halloween group in the Swap. 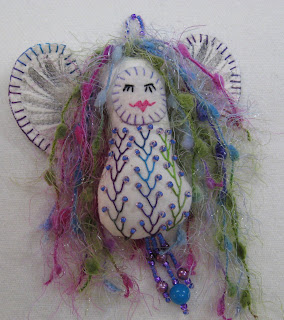 This is "Hairy Scary Fairy". She has wings that were stamped then machine quilted with batting, then cut out and a hand button hole stitched. The thread I used is a cotton cord thread that I hand dyed. I love the wild hair, some fancy yarn. This one is for the Fairy group. 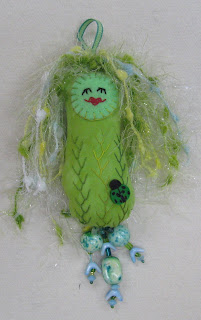 This is "The Wild Thing" Dotee Doll. She is in the Monochromatic colour group. 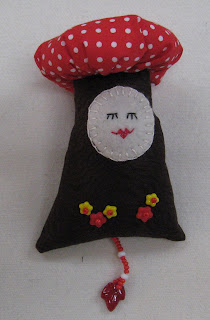 Here is Toad. He the first Dotee Doll that I have made for a Swap on Two Peas in a Bucket. He is for the Forest group.
Posted by Cathy Tomm at 9:39 PM No comments: Links to this post

Hi there blog world. My son is getting me started today. I love Quilting, horses, scrapbooking and I like to bake. So I am sure these will be the start to my topics.
Posted by Cathy Tomm at 3:00 PM No comments: Links to this post