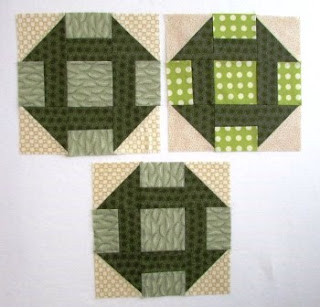 I got 3 Churn Dash blocks done this month. They were the last few blocks that got done for the Suit Case exchange. What is that? At the Leduc Guild - Black Gold Quilt Patch, Janet had this idea to do a Suit Case exchange. One problem we did not have a good suit case, so a shoe box was used. She started by placing a block pattern and 1 meter of fabric in the box. She did the first box. Then passed it on at the guild meeting. I was the last person and I was able to get 3 blocks done with what was left. Janet ended up winning the box of blocks. She also has more of the green fabric that was used in all the blocks. I think there were 11 finished blocks in the Box. 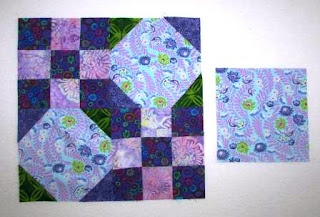 So as we were ending the 1st shoe box exchanges, I got to start the next ones. I bought this light colour Pink Tula print and picked out the nine patch and snow ball block. 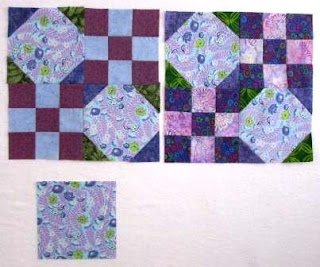 I made a second block. You see, if you do extra blocks you get your name in the draw and extra time. 2 blocks = 2 chances of winning. 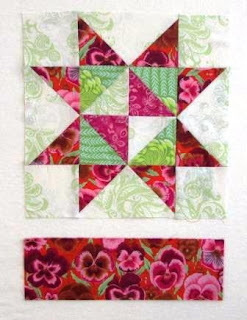 Next up was the pansy fabric I had bought for the next shoe box. The fabric is a Phillip Jacob fabric. I also bought myself some to keep for my stash. I love how this block turned out. I used a low value background fabric and then the medium green. My mom saw the block and wanted some of this green. I only had a FQ that I picked up a year ago or so. I think it is a Amy Butler fabric.